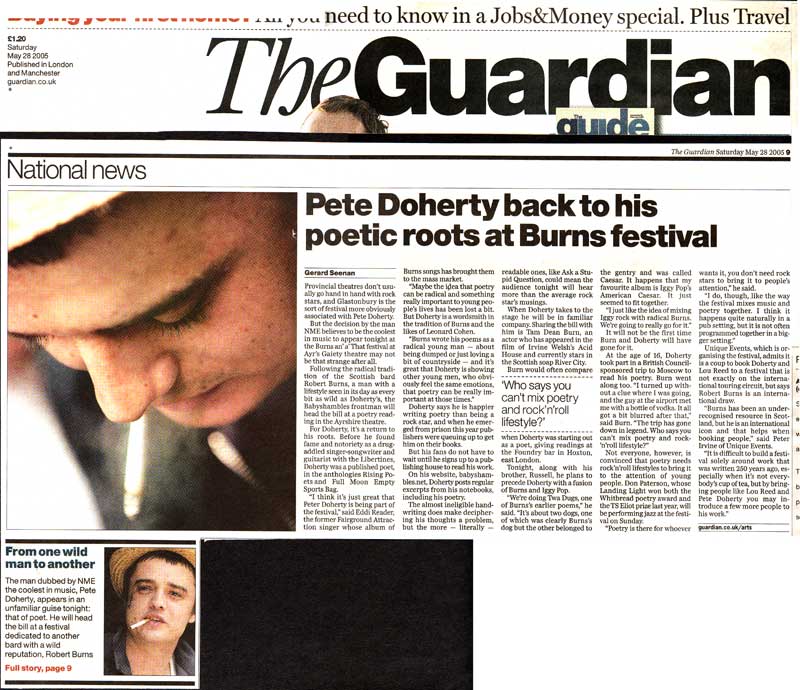 
The Guardian Tracey Moberly Pete Doherty back to his poetic roots at Burns festival Gerard Seenan 28 may 2005
Provincial theatres don't usually go hand in hand with rock stars, and Glastonbury is the sort of festival more obviously associated with Pete Doherty. But the decision by the man NME believes to be the coolest in music to appear tonight at the Bums an'a'That festival at Ayr's Gaiety theatre may not be that strange after all. Following the radical tradition of the Scottish bard Robert Burns, a man with a lifestyle seen in its day as every bit as wild as Doherty's, the Babyshambles frontman will head the bill at a poetry reading in the Ayrshire theatre. For Doherty, it 's a return to his roots. Before he found fame and notoriety as a drugaddled singer-songwriter and guitarist with the Libertines, Doherty was a published poet, in the anthologies Rising Poets and Full Moon Empty Sports Bag. "I think it's just great that Peter Doherty is being part of the festival," said Eddi Reader, the former Fairground Attraction singer whose album of Burns songs has brought them to the mass market. "Maybe the idea that poetry can be radical and something really important to young people's lives has been lost a bit. But Doherty is a wordsmith in the tradition of Burns and the likes of Leonard Cohen. "Burns wrote his poems as a radical young man - about being dumped or just loving a bit of countryside - and it's great that Doherty is showing other young men, who obviously feel the same emotions, that poetry can be really important at those times." Doherty says he is happier writing poetry than being a rock star, and when he emerged from prison this year publishers were queuing up to get him on their books. But his fans do not have to wait until he signs up to a publishing house to read his work. On his website, babyshambles.net, Doherty posts regular excerpts from his notebooks, including his poetry. The almost ineligible handwriting does make deciphering his thoughts a problem, but the more - literally - readable ones, like Ask a Stupid Question, could mean the audience tonight will hear more than the average rock star's musings. When Doherty takes to the stage he will be in familiar company. Sharing the bill with him is Tam Dean Burn, an actor who has appeared in the film of Irvine Welsh's Acid House and currently stars in the Scottish soap River City. Burn would often compare when Doherty was starting out as a poet, giving readings at the Foundry bar in Hoxton, east London. Tonight, along with his brother, Russell, he plans to precede Doherty with a fusion of Burns and Iggy Pop. "We're doing Twa Dugs, one of Burns's earlier poems," he said. "It's about two dogs, one of which was clearly Burns's dog but the other belonged to the gentry and was called Caesar. It happens that my favourite album is Iggy Pop's American Caesar. It just seemed to fit together. "I just like the idea of mixing Iggy rock with radical Burns. We're going to really go for it." It will not be the first time Burn and Doherty will have gone for it. At the age of 16, Doherty took part in a British Council-sponsored trip to Moscow to read his poetry. Burn went along too. "I turned up without a clue where I was going, and the guy at the airport met me with a bottle of vodka. It all got a bit blurred after that ," said Burn. "The trip has gone down in legend. Who says you can't mix poetry and rock' n'roll lifestyle?" Not everyone, however, is convinced that poetry needs rock'n'roll lifestyles to bring it to the attention of young people. Don Paterson, whose Landing Light won both the Whitbread poetry award and the TS Eliot prize last year, will be performing jazz at the festival on Sunday. "Poetry is there for whoever wants it, you don't need rock stars to bring it to people's attention," he said. "I do, though, like the way the festival mixes music and poetry together. I think it happens quite naturally in a pub setting, but it is not often programmed together in a bigger setting." Unique Events, which is organising the festival, admits it is a coup to book Doherty and Lou Reed to a festival that is not exactly on the international touring circuit, but says Robert Burns is an international draw. "Burns has been an underrecognised resource in Scotland, but he is an international icon and that helps when booking people," said Peter Irvine of Unique Events. "It is difficult to build a festival solely around work that was written 250 years ago, especially when it's not everybody's cup of tea, but by bringing people like Lou Reed and Pete Doherty you may introduce a few more people to his work" guardian.co.uk/arts