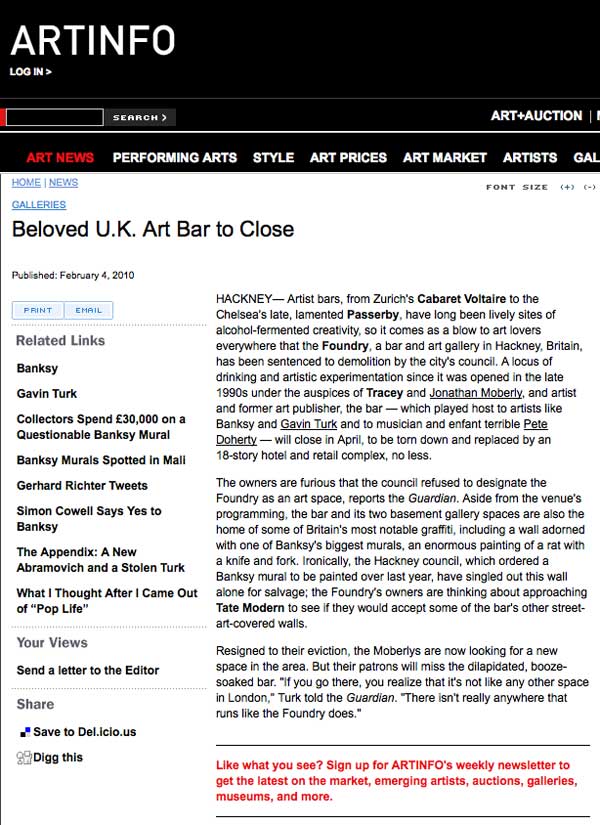 
ARTINFO [ link ] The Foundry Beloved U.K. Art Bar to Close February 4, 2010
HACKNEY— Artist bars, from Zurich's Cabaret Voltaire to the Chelsea's late, lamented Passerby, have long been lively sites of alcohol-fermented creativity, so it comes as a blow to art lovers everywhere that the Foundry, a bar and art gallery in Hackney, Britain, has been sentenced to demolition by the city's council. A locus of drinking and artistic experimentation since it was opened in the late 1990s under the auspices of Tracey and Jonathan Moberly, and artist and former art publisher, the bar — which played host to artists like Banksy and Gavin Turk and to musician and enfant terrible Pete Doherty — will close in April, to be torn down and replaced by an 18-story hotel and retail complex, no less. The owners are furious that the council refused to designate the Foundry as an art space, reports the Guardian. Aside from the venue's programming, the bar and its two basement gallery spaces are also the home of some of Britain's most notable graffiti, including a wall adorned with one of Banksy's biggest murals, an enormous painting of a rat with a knife and fork. Ironically, the Hackney council, which ordered a Banksy mural to be painted over last year, have singled out this wall alone for salvage; the Foundry's owners are thinking about approaching Tate Modern to see if they would accept some of the bar's other street-art-covered walls. Resigned to their eviction, the Moberlys are now looking for a new space in the area. But their patrons will miss the dilapidated, booze-soaked bar. "If you go there, you realize that it's not like any other space in London," Turk told the Guardian. "There isn't really anywhere that runs like the Foundry does."