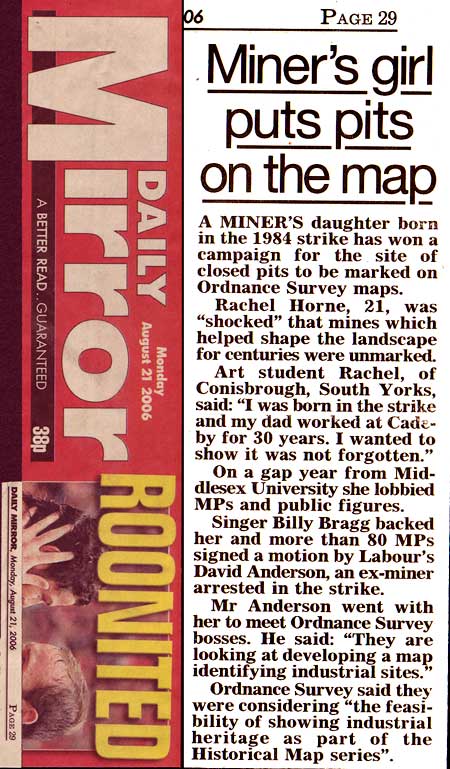 
Daily Mirror The Foundry Miner's girl puts pits on the map 1 August 2006
A MINER'S daughter born in the 1984 strike has won a campaign for the site of closed pits to be marked on Ordnance Survey maps. Rachel Horne, 21, was "shocked" that mines which helped shape the landscape for centuries were umnarked. Art student Rachel, of Conisbrough, South Yorks, said: "1 was born in the strike and my dad worked at Cadeby for 30 years. I wanted to show it was not forgotten." On a gap year from Middlesex University she lobbied MPs and public figures. Singer Billy Bragg backed her and more than 80 MPs signed a motion by Labour's David Anderson, an ex-miner arrested in the strike. Mr Anderson went with her to meet Ordnance Survey bosses. He said: "They are looking at developing a map identifying industrial sites." Ordnance Survey said they were considering "the feasibility of showing industrial heritage as part of the Historical Map series".