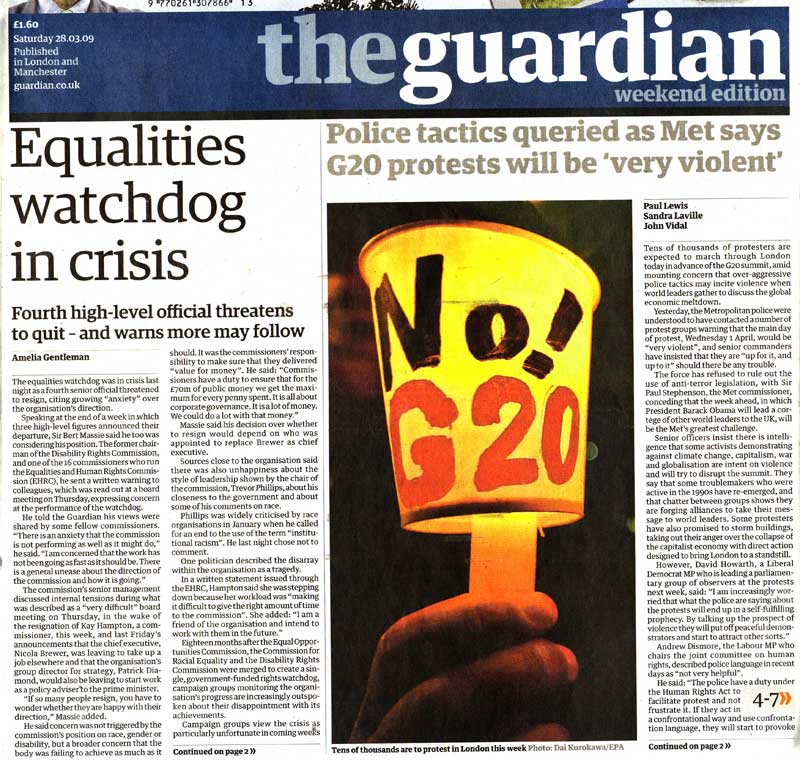 
The Guardian The Foundry Police tactics queried as Met says G20 protests will be 'very violent' Paul Lewis Sandra Laville John Vidal 28 March 2009
Tens of thousands of protesters are expected to march through London today in advance of the G20 summit, amid mounting concern that over-aggressive police tactics may incite violence when world leaders gather to discuss the global economic meltdown. Yesterday, the Metropolitan police were understood to have contacted a number of protest groups warning that the main day of protest, Wednesday 1 April, would be "very violent", and senior commanders have insisted that they are "up for it, and up to it" should there be any trouble. The force has refused to rule out the use of anti-terror legislation, with Sir Paul Stephenson, the Met commissioner, conceding that the week ahead, in which President Barack Obama will lead a cortege of other world leaders to the UK, will be the Met's greatest challenge. Senior officers insist there is intelligence that some activists demonstrating against climate change, capitalism, war and globalisation are intent on violence and will try to disrupt the summit. They say that some troublemakers who were active in the 1990s have re-emerged, and that chatter between groups shows they are forging alliances to take their message to world leaders. Some protesters have also promised to storm buildings, taking out their anger over the collapse of the capitalist economy with direct action designed to bring London to a standstill. However, David Howarth, a Liberal Democrat MP who is leading a parliamentary group of observers at the protests next week, said: "I am increasingly worried that what the police are saying about the protests will end up in a self-fulfilling prophecy. By talking up the prospect of violence they will put off peaceful demonstrators and start to attract other sorts." Andrew Dismore, the Labour MP who chairs the joint committee on human rights, described police language in recent days as "not very helpful". He said: "The police have a duty under the Human Rights Act to facilitate protest and not frustrate it: If they act in a confrontational way and use confrontation language, they will start to provoke the kind of behaviour they are seeking to prevent. There may well be a fringe element that want to incite violence. But that doesn't mean police should criminalise every protester." The direct action group Climate Camp - which is organising a mass overnight camp in the Square Mile on Wednesday night - said yesterday that it had tried to talk to the Met, but its efforts had been ignored. Lawyers acting for the group contacted City of London police on 10 March. In correspondence seen by the Guardian, solicitors said they were "willing to liaise" and requested names and contact details of officers. Subsequent requests have been made with the Metropolitan police. An email sent from the Met on Tuesday said the request had been forwarded to the operation command unit for consideration. "We've been constantly frustrated by our attempts to talk to the police about 1 April," said Climate Camp's Liz Shaw. "They don't return our letters, they say that they'll call us back... Surely they would want to enter into some sort of dialogue with us in advance of the event." Last night Scotland Yard denied that it had received any communication from the group and said it had been looking forward to hearing from them. The police operation over the next week will involve thousands of officers from six forces. Commander Bob Broadhurst of the Metropolitan police, who is in overall charge, said his officers would be at full stretch. They face the multiple challenges of protecting visitors such as Obama, and allowing the public to demonstrate. The first test may come today at the Put People First march to Hyde Park, which is organised by a coalition of more than 100 trade unions, churches, charities and campaign groups marching under the banner "jobs, justice and climate". There was anger last night over the cost of the summit after Foreign Office minister Lord Malloch-Brown disclosed the bill for the conference stands at Ł19m. But Gordon Brown yesterday urged voters not to be cynical about the G20, saying he had not travelled the globe this week simply to publish a communique. No 10 aides suggested that there may be a follow-up G20 summit in six months, which may also revisit the issue of whether there should be a further international coordinated stimulus in 2010. Lord Malloch-Brown, Gordon Brown's G20 envoy, said yesterday it was "likely" there will need to be a stimulus in 2010, adding the test of the summit will be whether the recession is shallower and shorter than it would have otherwise been.