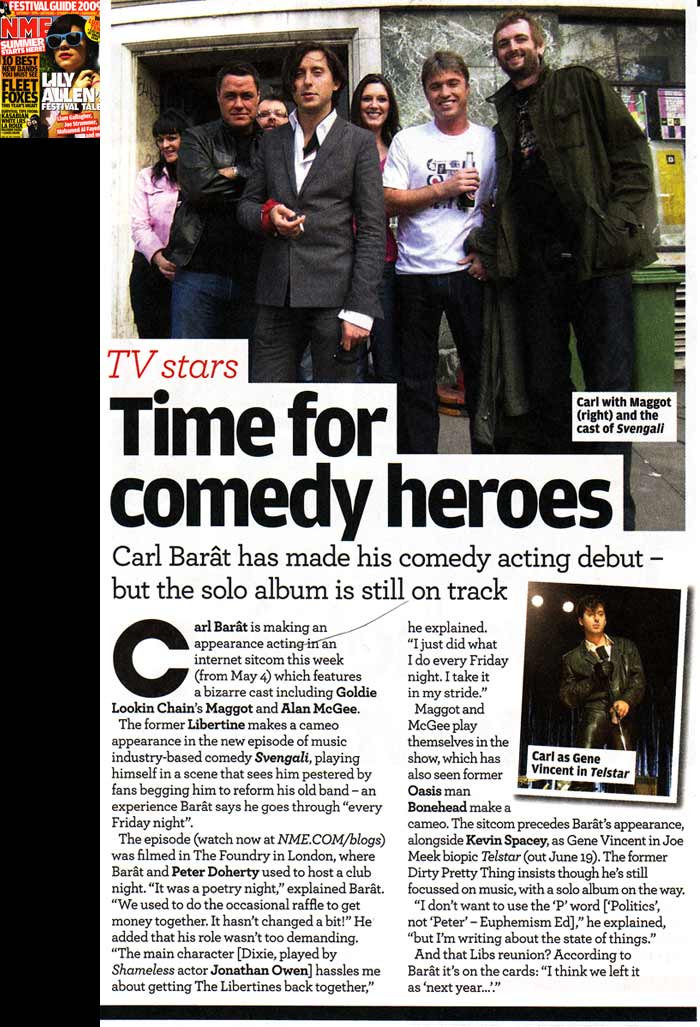 
NME New Musical Express Tracey Moberly Time for comedy heroes Carl Barat has made his comedy acting debut - but the solo album is still on track 9 May 2009
Carl Barat is making an appearance acting in an internet sitcom this week (from May 4) which features a bizarre cast including Goldie Lookin Chain's Maggot and Alan McGee. The former Libertine makes a cameo appearance in the new episode of music industry-based comedy Svengali, playing himself in a scene that sees him pestered by fans begging him to reform his old band - an experience Barat says he goes through "every Friday night". The episode (watch now at NME.COM/blogs) was filmed in The Foundry in London, where Barat and Peter Doherty used to host a club night. "It was a poetry night," explained Barat "We used to do the occasional raffle to get money together. It hasn't changed a bit!" He added that his role wasn't too demanding. "The main character [Dixie, played by Shameless actor Jonathan Owen] hassles me about getting The Libertines back together," he explained. "I just did what I do every Friday night. I take it in my stride." Maggot and McGee play themselves in the show, which has also seen former Oasis man Bonehead make a cameo. The sitcom precedes Barat's appearance, alongside Kevin Spacey, as Gene Vincent in Joe Meek biopic Telstar (out June 19). The former Dirty Pretty Thing insists though he's still focussed on music, with a solo album on the way. "I don't want to use the 'P' word ['Politics', not 'Peter' - Euphemism Ed]," he explained, "but I'm writing about the state of things." And that Libs reunion? According to Barat it's on the cards: "I think we left it as 'next year .. .'."