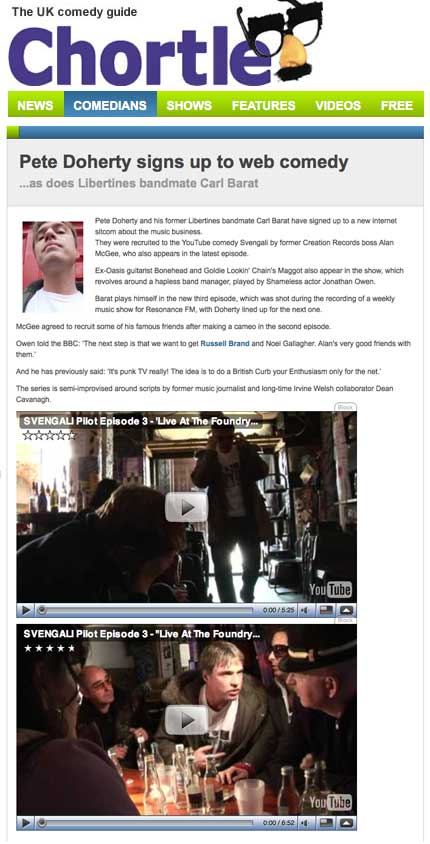 
Chortle The UK Comedy Guide Tracey Moberly Pete Doherty signs up to web comedy ...as does Libertines bandmate Carl Barat 5 May 2009
Pete Doherty and his former Libertines bandmate Carl Barat have signed up to a new internet sitcom about the music business. They were recruited to the YouTube comedy Svengali by former Creation Records boss Alan McGee, who also appears in the latest episode. Ex-Oasis guitarist Bonehead and Goldie Lookin' Chain's Maggot also appear in the show, which revolves around a hapless band manager, played by Shameless actor Jonathan Owen. Barat plays himself in the new third episode, which was shot during the recording of a weekly music show for Resonance FM, with Doherty lined up for the next one. McGee agreed to recruit some of his famous friends after making a cameo in the second episode. Owen told the BBC: ‘The next step is that we want to get Russell Brand and Noel Gallagher. Alan's very good friends with them.’ And he has previously said: ‘It's punk TV really! The idea is to do a British Curb your Enthusiasm only for the net.’ The series is semi-improvised around scripts by former music journalist and long-time Irvine Welsh collaborator Dean Cavanagh.