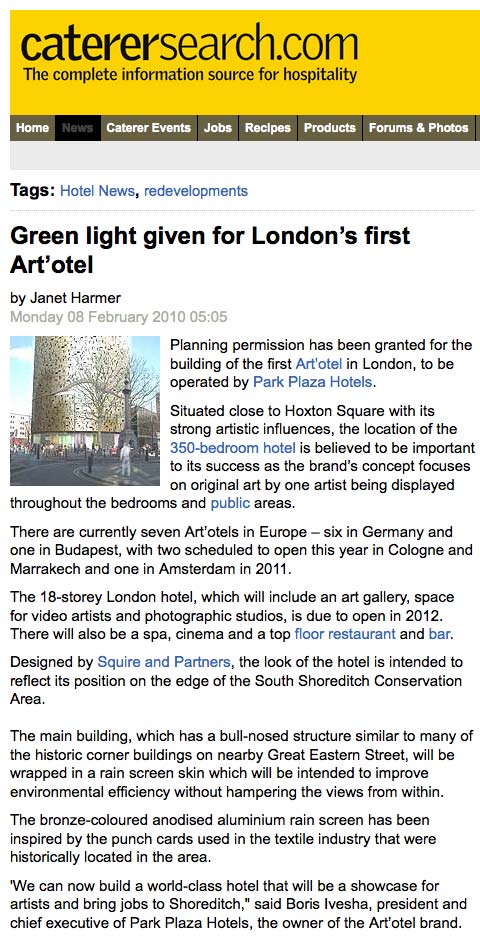 
CaterSearch.com [ link ] The Foundry Green light given for London’s first Art’otel The Art'otel Hoxton by Janet Harmer Monday 08 February 2010 05:05
Planning permission has been granted for the building of the first Art’otel in London, to be operated by Park Plaza Hotels. Situated close to Hoxton Square with its strong artistic influences, the location of the 350-bedroom hotel is believed to be important to its success as the brand’s concept focuses on original art by one artist being displayed throughout the bedrooms and public areas. There are currently seven Art’otels in Europe – six in Germany and one in Budapest, with two scheduled to open this year in Cologne and Marrakech and one in Amsterdam in 2011. The 18-storey London hotel, which will include an art gallery, space for video artists and photographic studios, is due to open in 2012. There will also be a spa, cinema and a top floor restaurant and bar. Designed by Squire and Partners, the look of the hotel is intended to reflect its position on the edge of the South Shoreditch Conservation Area. The main building, which has a bull-nosed structure similar to many of the historic corner buildings on nearby Great Eastern Street, will be wrapped in a rain screen skin which will be intended to improve environmental efficiency without hampering the views from within. The bronze-coloured anodised aluminium rain screen has been inspired by the punch cards used in the textile industry that were historically located in the area. 'We can now build a world-class hotel that will be a showcase for artists and bring jobs to Shoreditch," said Boris Ivesha, president and chief executive of Park Plaza Hotels, the owner of the Art’otel brand.