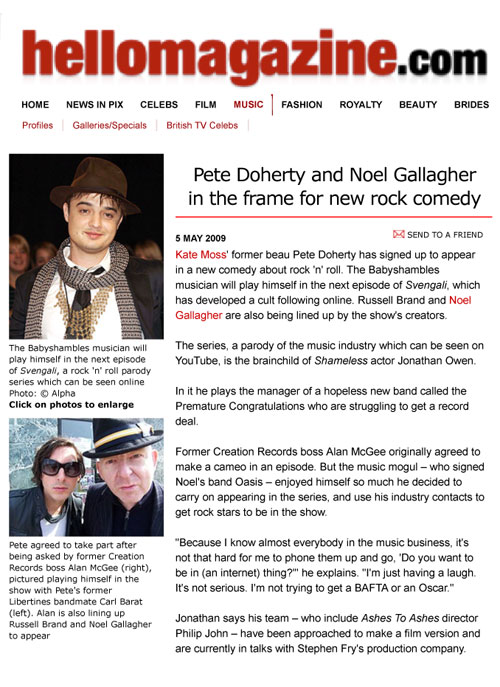 
hellomagazine.com link Tracey Moberly Pete Doherty and Noel Gallagher in the frame for new rock comedy 5 MAY 2009
Kate Moss' former beau Pete Doherty has signed up to appear in a new comedy about rock 'n' roll. The Babyshambles musician will play himself in the next episode of Svengali, which has developed a cult following online. Russell Brand and Noel Gallagher are also being lined up by the show's creators. The series, a parody of the music industry which can be seen on YouTube, is the brainchild of Shameless actor Jonathan Owen. In it he plays the manager of a hopeless new band called the Premature Congratulations who are struggling to get a record deal. Former Creation Records boss Alan McGee originally agreed to make a cameo in an episode. But the music mogul – who signed Noel's band Oasis – enjoyed himself so much he decided to carry on appearing in the series, and use his industry contacts to get rock stars to be in the show. "Because I know almost everybody in the music business, it's not that hard for me to phone them up and go, 'Do you want to be in (an internet) thing?'" he explains. "I'm just having a laugh. It's not serious. I'm not trying to get a BAFTA or an Oscar." Jonathan says his team – who include Ashes To Ashes director Philip John – have been approached to make a film version and are currently in talks with Stephen Fry's production company.