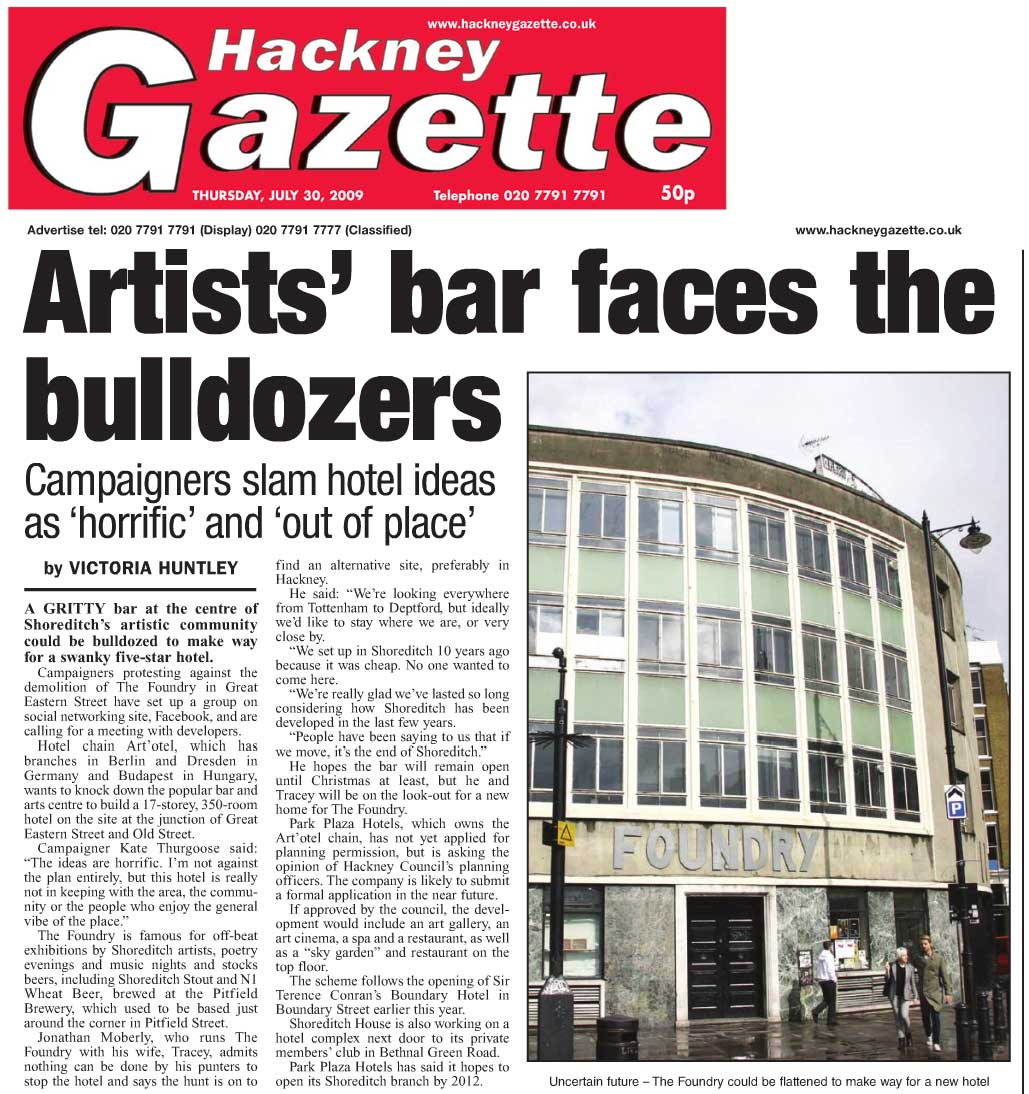 
Hackney Gazette The Foundry Tracey Moberly Artists' bar faces the bulldozers Campaigners slam hotel ideas as 'horrific' and 'out of place' by Victoria Huntley 30 July 2009
A GRITTY bar at the centre of Shoreditch's artistic community could be bulldozed to make way for a swanky five-star hotel.. Campaigners protesting against the demolition of The Foundry in Great Eastern Street have set up a group on social networkipg site, Facebook, and are calling for a meeting with developers. Hotel chain Art'otel, which has branches in Berlin and Dresden in Germany and Budapest in Hungary, wants to knock down the popular bar and arts centre to build a 17-storey, 350-room hotel on the site at the junction of Great Eastern Street and Old Street. Campaigner Kate Thurgoose said: "The ideas are horrific. I'm not against the plan entirely, but this hotcl is really not in keeping with thc area, the community or the people who enjoy the general vibe of the place." The Foundry is famous for off-beat exhibitions by Shoreditch artists, poetry evenings and music nights and stocks beers, including Shoreditch Stout and N1 Wheat Beer, brewed at the Pitfield Brewery, which used to be based just around the corner in Pitfield Street. Jonathan Moberly, who runs The Foundry with his wife, Tracey, admits nothing can be done by his punters to stop the hotel and says the hunt is on to find an alternative site, preferably in Hackney. He said: "We're looking everywhere from Tottenham to Deptford, but ideally we'd like to stay where we are, or very close by. "We set up in Shoreditch 10 years ago because it was cheap. No one wanted to come here. "We're really glad we've lasted so long considering how Shoreditch has been developed in the last few years. "People have been saying to us that if we move, it's the end of Shoreditch." He hopes the bar will remain open until Christmas at least, but he and Tracey will be on the look-out for a new home for The Foundry. Park Plaza Hotels, which owns the Art'otel chain, has not yet applied for planning permission, but is asking the opinion of Hackney Council's planning officers. The company is likely to submit a formal application in the near future. If approved by the council, the developmcnt would include an art gallery, an art cinema, a spa and a restaurant, as well as a "sky garden" and restaurant on the top floor. The scheme follows the opening of Sir Terence Conran's Boundary Hotel in Boundary Street earlier this year. Shoreditch House is also working on a hotel complex next door to its private members' club in Bethnal Green Road. Park Plaza Hotels has said it hopes to open its Shoreditch branch by 2012. Caption: Uncertain future - The Foundry could be flattened to make way for a new hotel