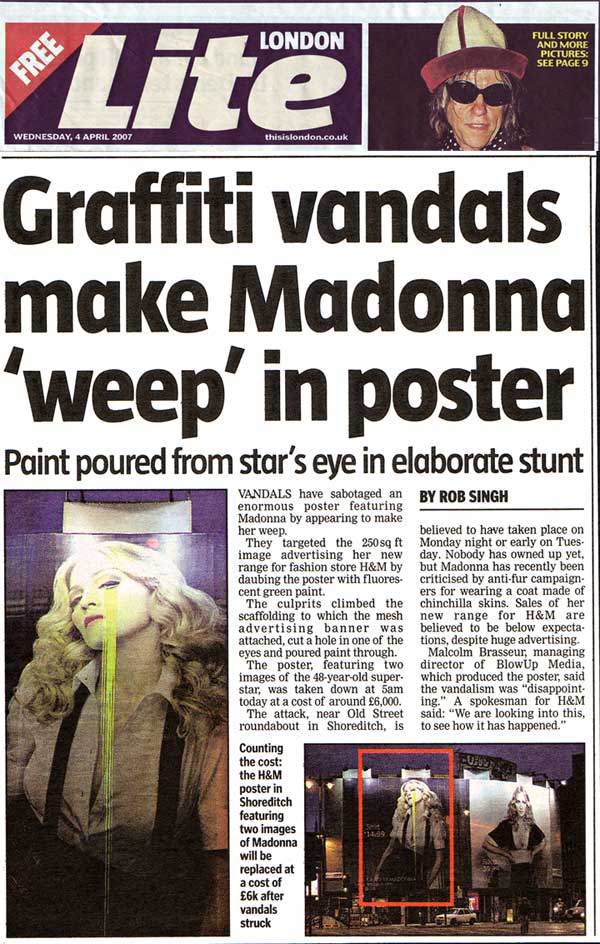 
London Lite thisislondon.co.uk The Foundry Graffiti vandals make Madonna 'weep' in poster Paint poured from star's eye in elaborate stunt BY ROB SINGH 4 April 2007
VANDALS have sabotaged an enormoUs poster featuring Madonna by appearing to make her weep. They targeted the 250 sq ft image advertising her new range for fashion store H&M by daubing the poster with fluorescent green paint. The culprits climbed the scaffolding to which the mesh advertising banner was attached, cut a hole in one of the eyes and poured paint through. The poster, featuring two images of the 48-year-old superstar, was taken down at 5am today at a cost of around Ł6,000. The attack, near Old Street roundabout in Shoreditch, is believed to have taken place on Monday night or early on Tuesday. Nobody has owned up yet, but Madonna has recently been criticised by anti-fur campaigners for wearing a coat made of chinchilla skins. Sales of her new range for H&M are believed to be below expectations, despite huge advertising. Malcolm Brasseur, managing director of BlowUp Media, which produced the poster, said the vandalism was "disappointing." A spokesman for H&M said: "We are looking into this, to see how it has happened."